Winner of the 2010 Brighton Marina

The morning of the pollack competition had finally arrived and after twice being cancelled due to unsuitable weather conditions today was to be third time lucky.  Eager and full of excitement we were up at 5am in order to get down the marina early.  It took no time at all to gather everything we needed as we had spent the evening before making sure that we had everything ready and all set to go.   The car was loaded with the Viking hats for the crew and all that needed doing was to don the Viking costume grab a quick cup of tea and head off.
We arrived on the charter boat pontoon before 6.00am, all was quiet but soon all the skippers and anglers taking part started to arrive and the whole pontoon became alive with the buzz of activity and by 7.00am everyone was enjoying breakfast and sharing some great competitive banter.

With a couple of late cancellations due to illness we had a small crew on board for the day but we were all determined to fish like crazy and bring home the winning fish.

With everyone registered to take part and a last minute trip to the tackle box for some extra Sidewinders and Jelly worms we were ready to line up at the Bottle buoy with the other boats ready for the start.

This proved to be really exciting and while waiting for the whistle everyone took the opportunity to take a few photographs of all the other competitors and their boats.

I have never seen so many boats full throttle so close together jostling for position to head out to their chosen mark.  Ray really gave it some wellie and pushed the revs right up to get away and ahead of the other boats, 20 knots plus!  Boats to the left/right/in front and behind were, as Frank said, like a scene from wacky races.

White water everywhere and cheers from all the anglers.  A fantastic start!

Once a couple of miles out and with all the boats heading in different directions we had time to focus our attention on the tactics for a Team Viking Victory.  Yesterday’s wreck fishing trip had seen all the Pollack caught on either a rhubarb and custard sidewinder sand eel or a black and red Jelly worm so this was what we were going to start with.  We arrived at the wreck just in time to pinch the last of the tide but with the water quickly turning slack we were going to have to wait for the tide to get going again before we were to see the first fish netted.

Connor, our teams little superstar, was the first to get a good bite and the first Pollack. 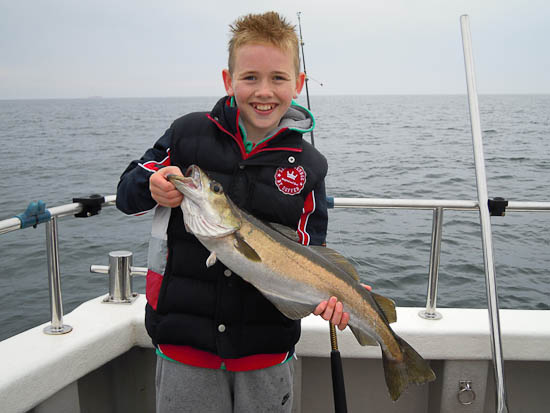 He skilfully played the fish to the surface and claimed ownership of the crown Viking hat. 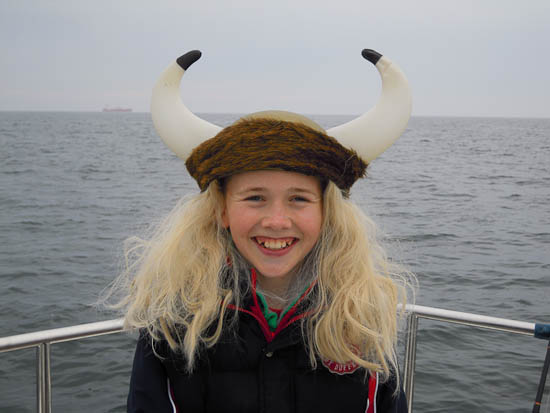 Only the next person to catch a fish could take it away from him.  This was quickly done by James who had managed to foul hook his Pollack in the back of its neck. This meant the fish put up a really good fight and had James convinced the fish was a lot bigger than it turned out to be.  Frank was next catching his first Pollack from a boat. 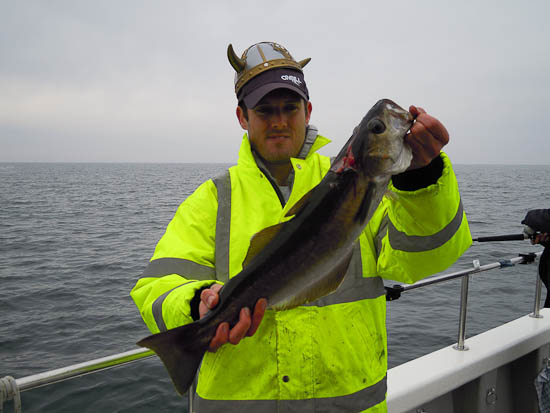 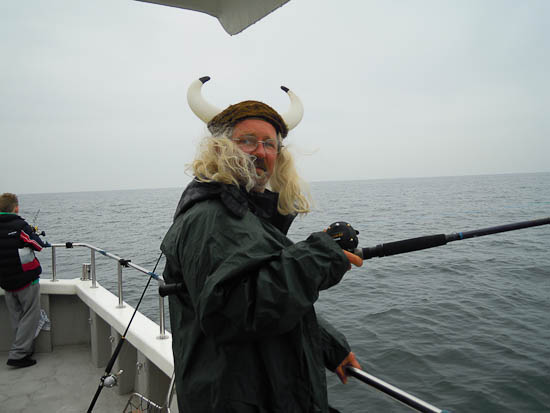 It was about this time that the rain started and although it was not cold it was to stay wet for the next few hours.  Undeterred and still determined to nail a good fish it was heads down and working the lures in anticipation of the next bite.

After all of the rods getting good bites but not seeing another fish landed for about 20 minutes it was time for a move.   We needed to stay on the fish at all times if we were going to catch one of a good size.  The move proved to be a good one.  Darren was next to shout for net and landed this lovely 10 lb’er.  The fish gave him a good fight taking several dives before reaching the surface.

It was at this point I started to think that something was amiss.  Everyone had landed a fish except me.  Well this would have to be changed and quickly.   With all the guys taking the opportunity to wind me up about not yet getting on the fish it was time to do something about it.  While Ray lined up the next drift James and I took a look at the sounder and I jokingly said to James that I had spotted my fish.  At this point the size was not all that important I just needed to catch something.

Ray skilfully guided us up to the wreck and gave us the nod when we hit the right spot for the fish.  Everyone sent their lures down to the bottom and worked up to about 20 turns.  I decided to stop winding at 10 turns I knew the fish were on the bottom and I wanted to stay in the zone until one took a fancy to my rhubarb and custard sidewinder.   That’s when it happened BANG went my rod and I was in!

I started to reel in but this fish was not coming up anytime soon – the more I reeled the stronger the dive and fish was aiming for the bottom and taking line with it.  Keeping a good bend in my rod I waited for the fish to stop and then tried again to reel it in.  Not this time or the next or even the next.  This fish was going to fight all the way.   James was asking if it was a big one and although I knew this was a decent fish I just replied that it probably wasn’t all that big and that it was just a feisty one.

With the fish almost at the surface he took one final last-ditch effort to get back to the safety of the wreck.  It was one of those moments where you just have to hold on and you can’t help but shout wooooooowwww in an effort to slow the fish down.

It seemed to do the trick as the fish had now given up.  Ray was ready and waiting with the net and everyone was watching to get a first glimpse.  Smiles all round – this was a good one.  Ray estimated it at around 15lb so it was straight in the box and fingers crossed it would be big enough to take one of the prizes. 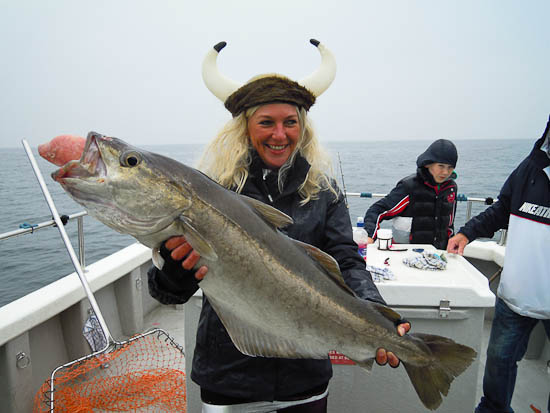 Could this be the winning fish?

Having heard on the radio that nothing bigger had been caught the excitement was building.

We had another short lull in the fishing so made one more move onto a wreck that was heading back towards the marina.  This is where we spent the rest of the day and it produced some more nice fish into double figures.  We had heard of only one other fish at around the 15lb mark and we were hopeful that we were in with a chance of taking top prize or was it a case of all the other boats keeping quite about a big catch???????

Connor ended up with a total of 3 very nice fish.  Frank had 2 fish as did James.  Darren had to be content with his double from earlier in the day but it was worth a chance at the weigh in.  I got my total up to 4.  Time to head home and weigh in. 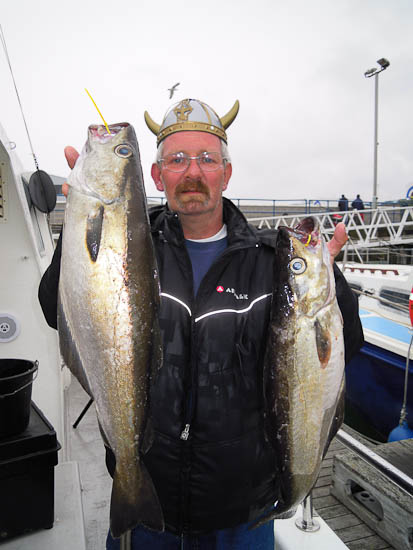 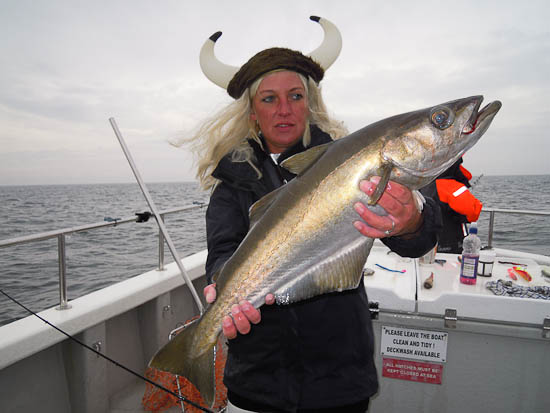 Heading back after a great day the talk turned to what our chances were.  A possible top fish, another good double and also a chance for young Connor to take the junior prize.

What a tense half hour this was.  I wish I had left taking my fish up till nearer 4.30pm but as it was I just couldn’t wait so I was one of the first up there.  The fish being weighed came in at 14lb 15oz and then it was my turn.  Into the bag it went and we watched as the scales settled on 15lb 8oz!!!  I was in first place but why didn’t I hold back 15 minutes or so because of course what this meant was that I then had to stand and watch as everyone else came up for with their best catch and it was a case of holding my breathe every time one looked like it might be the one to beat mine.

I could hardly bear it so took a stroll back down to the boat to kill 5 minutes.

More tension as a group of lads arrived with some cracking looking fish.

Onto the scales they went one at a time all weighing in at around the 12/14 lb mark.

By this point we knew that Connor had taken the top prize for the junior competition but could we make it a double whammy?

The last fish on the scales and a huge sigh of relief – a huge smile and a thump of the air and we had done it.  Team Viking had taken 2 top prizes. 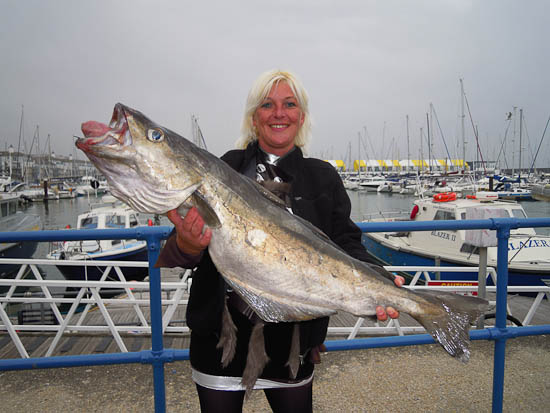 The prize giving at 5.00pm allowed us all a chance to really enjoy the moment and its one I won’t ever forget.

Winner of the 2010 Brighton Marina 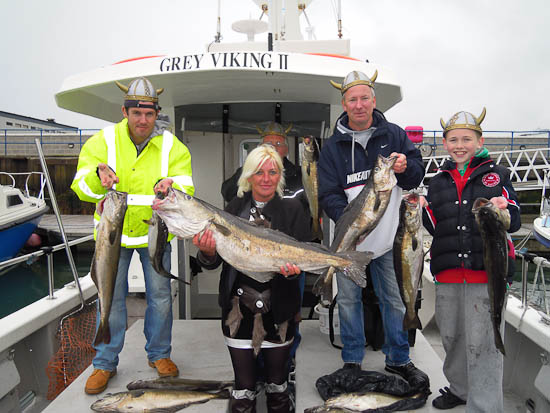 A big thank you to all the crew and to Ray our fantastic skipper who got us on the right wreck at the right time for the best fish of the day.  We all had the most fantastic day.  See you all again next year.